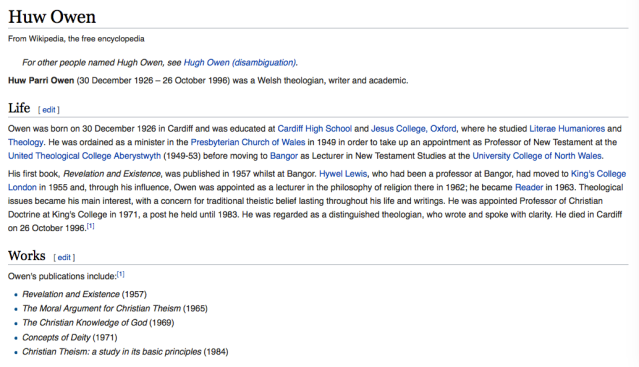 Can what we say about God be literally true in the same sense as when applied to finite human experience?

H. P. Owen gives an answer to this question in his The Christian Knowledge of God(copyright 1969). Owen argues in favor of using analogy to speak about God.

As Owen writes, “The problem that faces the theist is this. God is infinite and incorporeal; but we, and all created things within this spatio-temporal universe, are finite and corporeal. How, then, can the concepts and images which we draw from our experience be applicable to God?”

We have two major ways of speaking about God. The first way is negative (the via negative): This means that we talk about what God is not. (It doesn’t mean that we say bad things about God!)

In addition, there is a positive way of speaking about God. In this way, we make definite assertions about God. As Owen points out, there are three modes of positive predication:

In the via negativa, we say what God is not: We avoid making definite assertions about God. Owen writes, “According to this way, when we say that God is personal we are entitled to assert only that he is not impersonal.” Examples of the via negativainclude these sentences:

According to Brian Davies, author of An Introduction to the Philosophy of Religion(1993), “The appeal to negation is best thought of as an attempt to prevent people from misrepresenting God. Those who make it emphasize the unknowability of God and argue that, though one can talk significantly about God, one can only do so by saying what he is not.”

1) We want to say that God is good, not that God is not evil. The via negativadoes not allow us to speak positively about God. In fact, Owen writes, the via negativa“is not a reformulation, but an outright denial, of theism. The statement ‘God is not evil’ is not equivalent to the statement ‘God is good.’” Surely Owen is correct here; a person can be not evil, yet not be good.

3) “In fact every theist (however subtle he may be) is sooner or later bound to forsake thevia negativa.” Owen’s example is this: If a person is “asked whether God transcends the world, could he seriously answer, ‘I don’t know, but I’m sure he is not identical with it.’”

4) The via negativais incompatible with the language of the Bible. For example, Jesus spoke of God as a father, and Jesus did not use the via negativain doing so.

The Univocal and Equivocal Uses of Language

In the equivocal use of language, a word has a major shift in meaning when applied to different things. For example, I can call my pet Rover a dog (he is one), but I can also call a certain brand of computer a “dog.” However, when I call a computer a dog, the word has a very different meaning from what it had when I called my pet a dog.

In logic, one should avoid the fallacy of equivocation: drawing an illogical conclusion because of a shift in meaning in a word used in the argument. For example:

P1: A dog has four legs and barks.

C: My computer has four legs and barks.

We need a third way of speaking positively about God. That way is discovered with the analogical use of language.

There are two types of analogy, only one of which is useful in speaking about God. The Analogy of Attribution (aka the Analogy of Proportion) is not useful in speaking about God; in the Analogy of Attribution two things are being compared, but the quality being attributed to both things properly belongs to only one thing. As an example, Aristotle used the statement that a certain climate is healthy. Of course, a climate cannot be healthy in the sense that a person is healthy. However, we can meaningfully say that a climate is healthy in the sense that it contributes to (helps cause) health in human beings.

The Analogy of Attribution is not useful in speaking about God because God caused everything that exists. God caused the material universe to exist, yet we would not want to say that God is material.

Owen responds to four objections against the use of analogy in theology. The first two were made by the husband-and-wife team of Peter Geach and G. E. M. Anscombe.

1) Analogy is based on a mathematical model in which three of four terms are known (e.g., 3 is to 6 as 4 is to x); however, in analogy as used in theology, only two terms (the terms referring to humans) are known, and therefore we cannot use analogy to speak about God.

Owen’s response: Owen points out that a theological analogy is different from a mathematical analogy. Also, we do know something about God before assigning qualities to Him: God is a “self-existent being.” In addition, we can affirm qualities of God. We can know thatGod is good, even though we cannot say we know howGod is good.

2) “… since God’s wisdom is supposedly identical with God, but not man’s wisdom with man, the metaphor breaks down at once; for we cannot have in mathematics that x is to a as b is to c, and x = a, but not b = c.”

3) “… the doctrine of analogy has been found objectionable on the ground that, in order to avoid equivocality, it asserts an identity between God and man, but that ‘the supposition that any identity of characteristic can hold between God and man is incompatible with the fundamental assumption that God is infinite.’”

Owen’s response: Once again, Owen points out that analogical language recognizes both similarities anddifferences. The identity that exists between God and humanity is not a pure identity, but only an “identity in difference.”

4) “… we cannot meaningfully predicate an X of God when X is unknowable.”

Owen’s response: We can give a meaning to X in terms of finite objects. For example, when say that “God is wise,” we have an understanding of wisdom as it is found in finite objects such as human beings.

Jesus speaks of God as Father; in doing so, Jesus is speaking analogically. In addition, Jesus does not qualify the analogical language by using the via negativa. But how can this unqualified analogy be true? According to Owen, “… positive images [such as calling God “Father”] refer to God indirectly.”

Note: The quotations by H. P. Owen that appear in this essay are from his book The Christian Knowledge of God (London: University of London, The Athlone Press, 1969).

The quotations above are from Exploring the Philosophy of Religion, by David Stewart, 2nd edition, 1988.

This entry was posted in Philosophy and tagged H. P. Owen. Bookmark the permalink.