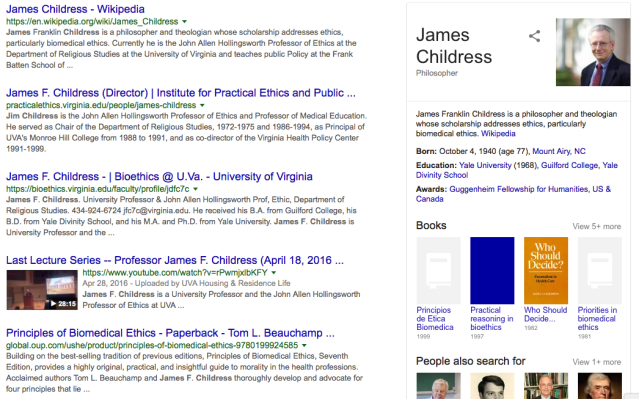 James F. Childress is a philosopher who has studied ethical issues involving scarce life-saving medical resources. He wrote about his findings in his article “Who Shall Live When Not All Can Live?”, published in Soundings, Vol. 53, No. 4 (Winter, 1970).

He believes that we can choose — ethically — who shall live in a situation where only four hearts are available and 10 people need them. In making this choice, Childress proposes two stages.

Stage One: Identifying the Medically Acceptable

First, we need to identify the medically acceptable. By medically acceptable, Childress does not mean those who can afford the operation. Instead, he means those who will benefit substantially if they have the operation. Thus, if there are a limited number of hearts and one person will die soon even if he or she receives a heart, Childress would deny a heart to that person. Instead, Childress would give the heart to a person who is likely to be in perfect health after receiving the heart.

Once we have rejected those who are not medically acceptable, we still have to decide who will get the hearts (assuming that people still need more hearts than are available). This raises some problems. In stage one, we used utilitarianism; in stage two, should we continue to use utilitarianism? If we do, then we have to decide such things as which people, if they continue to live, will bring the greatest amount of happiness into the society they live in.

Childress rejects utilitarianism in stage two. Instead, he advocates randomness; that is, casting lots to decide who will receive hearts. Thus, chance will be used to determine who lives and who dies. Childress gives seven arguments for using randomness in the second stage.

If we believe that all human life is valuable, then we can treat it as valuable by not ranking the quality of lives according to social utility.

2: Randomness safeguards the relationship of trust between the physician and the patient.

Let’s try a thought experiment. Let’s assume that we have to decide who shall live when not all can live. As a way to make this decision absolutely impartial, let’s assume that everyone is ignorant of his or her position in society. (That way, I can’t argue that professors are incredibly valuable people, and thus I should get a heart.) If we were covered by this veil of ignorance, how do you think we would decide to distribute the hearts? Probably by throwing lots; that way, everyone would have an equal chance at getting a heart.

Let’s assume that you don’t get a heart. Your physician comes into your hospital room and says, “Sorry, but we gave the hearts to people we consider more worthy than you.” Alternatively, your physician says, “Sorry, we threw lots and your number wasn’t one of the lucky ones.” What would you rather hear? That you aren’t regarded as being valuable, or that you weren’t lucky?

If the wealthy become aware that they can’t simply buy a heart, but may have to submit to the casting of lots, the wealthy may donate more of their money to providing life-saving medical resources for everybody.

An Argument Against Childress

I agree with much of what Childress has to say. I do agree that in the first stage, we ought to determine who is medically acceptable. If a person won’t benefit much from receiving a heart, we ought to give that heart to someone who will benefit substantially more from it.

However, I disagree with total randomness in the second stage. I believe that we can be utilitarian even here — in extreme cases. For example, what if a person who needs a heart is a famous cancer researcher on the verge of a major breakthrough that could save the lives of thousands of people? Since this person is in a position to save so many lives, I would make sure this person gets a heart.

Another example: What if a person who needs a heart is a rapist? Wouldn’t it be an affront to justice if the rapist gets a heart and people who are law-abiding citizens don’t? (Suppose one of the rapist’s victims doesn’t get a heart because the rapist gets one?) Because of these considerations, I would make sure that the rapist does not get a heart.

Here’s how I would decide who gets hearts that are needed for transplants when there are not enough hearts for everyone to get one:

Stage One: Identifying the Medically Acceptable.

Suppose a person will die within a few months even if she receives a heart; I would deny that person a heart since the other applicants will benefit much more if they receive the heart.

Suppose a person is a cancer researcher on the verge of a major breakthrough. I would make sure that person received a heart because that person may be able to save many thousands of lives if that person can complete the research.

Suppose one candidate for a heart is a convicted serial rapist. That rapist has brought misery to many lives. I would deny that person a heart.

For whatever hearts are left, I would cast lots to determine who gets the hearts.

Note: The quotations by James F. Childress that appear in this essay come from his article “Who Shall Live When Not All Can Live?”, published in Soundings, Vol. 53, No. 4 (Winter, 1970).

William Shakespeare’s Measure for Measure: A Retelling in Prose, by David Bruce

Ben Jonson’s The Alchemist: A Retelling in Prose

This entry was posted in Philosophy and tagged James F. Childress. Bookmark the permalink.