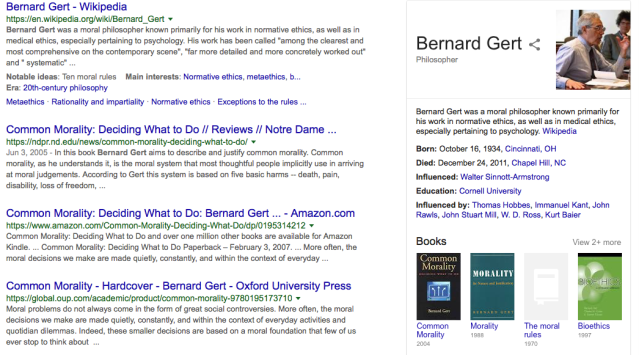 Bernard Gert was born in Cincinnati, Ohio, in 1934. The source of this essay is a paper that Mr. Gert gave at Ohio University

I. A Moral Theory

First, Mr. Gert gives his definition of a moral theory:

A moral theory consists of the analysis of the concepts necessary to explain and, if possible, justify morality, viz., rationality, impartiality, and morality itself, together with an account of how they are related to each other.

In addition to this definition, Mr. Gert identifies the things that a moral theory must do:

Mr. Gert’s definitions of morality and of a public system are as follows:

(1) that all persons to whom it applies, those whose behavior is to be guided and judged by that system, understand it, i.e., know what behavior the system prohibits, requires, allows, and encourages; and,

(2) that it is not irrational for any of them to accept being guided or judged by.

His example of a public system is that of a game. A basketball player understands and accepts the rules, and he or she does not find it irrational if he or she or other players commit a foul and have to pay the penalty for it.

A person with sufficient knowledge and intelligence to be a moral agent acts irrationally when he acts in a way that he knows (justifiably believes), or should know, will significantly increase the probability that he will suffer death, pain, disability, loss of freedom or loss of pleasure, and he does not have an adequate reason for so acting.

For example, a person who sticks his or her hand in a blender and then turns the blender on just to see what it feels like is behaving irrationality. The reason for this action is not adequate considering the pain and disability the person will suffer. (I have known a mentally ill person who cut off the tips of his fingers just because he felt like it.)

Things such as race, sex, religion, and creed are not relevant considerations. (For example, we can’t be impartial only toward white people.) What is relevant is rationality and being a person. A person who has lost his or her reason but who is still a person must also be considered impartially.

According to Mr. Gert, “The moral theory that all impartial rational persons would choose as a public system that applies to all rational persons is the justified moral system.” The rules of this system appear below:

A. Moral Rules that Prohibit Evils All Rational Persons Want to Avoid

B. Moral Rules that Prohibit Actions that Generally Lead to Evil

Gert allows for exceptions (riders) to these rules. How does one know when to make an exception? Gert’s answer is this:

However, this does not mean that all rational people will always agree about exceptions. People can legitimately disagree over a ranking of goods and evils. In contrast to other ethical theorists, Mr. Gert recognizes that an ethical theory will not always lead to agreement about what we ought to do.

For example, should doctors lie to their patients? This used to be done regularly. A patient would be dying of cancer, and the doctor would know it, but the doctor would tell the patient that he or she had nothing to worry about. Some rational people may argue that this policy relieves some of the suffering the patient would otherwise undergo. Others may argue that if it were publicly known that doctors sometimes lie to their patients, then healthy patients would suffer because when their doctor told them that they were OK, they would not know whether to believe the doctor. In addition, isn’t the doctor depriving a terminally ill patient of the freedom to make decisions based on accurate information when the doctor lies to the patient?

VI. Contrasts With Other Systems for Guiding Conduct

For example, Kantian ethics can be rigid. Mr. Kant even wrote that one ought never to break a promise! Mr. Gert’s moral system, however, allows one to break one’s promise if the consequences will be good; for example, if breaking a promise will result in saving an innocent person’s life.

Mr. Gert also believes in moral ideals, such as preserving life and relieving pain. However, these ideals merely encourage certain kinds of actions — they do not require them. For example, you are not required to run into a burning house to save the house’s inhabitants, although it would be praiseworthy if you were to do so.

As Donald Borchert, Alburey Castell, and Arthur Zucker, the authors of the textbook An Introduction to Modern Philosophy, say, “Our attitude toward the moral rules should be one that allows violations (exceptions) if and only if an impartial, rational person can publicly advocate that violation.”

This entry was posted in Philosophy and tagged Bernard Gert. Bookmark the permalink.