Posted on February 9, 2018 by davidbruceblog 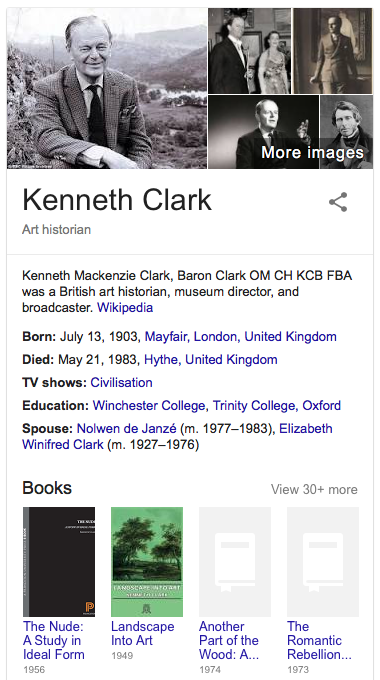 The first chapter of The Nude: A Study in Ideal Form by Sir Kenneth Clark (1903-1983) is entitled “The Naked and the Nude.” In it, he draws a distinction between the naked and the nude. The naked is the human being without clothes. Imagine a dream in which you suddenly find yourself without any clothes in a group of fully clothed people. You will feel embarrassed. This is an example of the naked.

The nude, however, is depicted in art. The artist depicts an ideal form instead of the imperfect bodies that we are born with — or that we acquire through aging and bad habits. As such, the nude is an art form that was invented by a particular people — the Greeks — at a particular time — the fifth century B.C.E. Therefore, Sir Kenneth writes, “… the nude is not the subject of art, but a form of art.”

Because of this, Sir Kenneth writes, the naked human body is no more than a “point of departure for a work of art.” However, the human body does have certain associations that are not lost in the work of art. For example, there is an eroticism in the naked human being. Human beings — like all creatures — wish to reproduce. Although some critics have denied that there is eroticism in art, Sir Kenneth points out that eroticism is obviously present in the nude.

Other aspects of human experience captured by the naked body, Sir Kenneth writes, include “harmony, energy, ecstasy, humility, pathos.” Because of this, we may think that “the nude as a means of expression is of universal and eternal value,” but Sir Kenneth states that this view is mistaken. The nude has been at home “[o]nly in countries touching on the Mediterranean.”

Both Sir Kenneth and the ancient Greek philosopher Aristotle believe that in our search for physical beauty our instinctive desire is to perfect, not to imitate. The artist who creates a nude is in search of ideal beauty. Therefore, the chief assumption that underlies Sir Kenneth’s and Aristotle’s view is that ideal beauty exists. Readers will remember that among Plato’s Forms or Ideas is Beauty.

Historically, when the artist tries to create ideal beauty, there have been two critical interpretations — neither of which Sir Kenneth finds satisfactory — of the ideal:

2) To achieve an ideal whole, the artist may search for “the middle form.” According to this idea, the beautiful is the average. The USAmerican actor Robert Redford is handsome because the distance between his eyes is average — if the distance were greater than average or shorter than average, he would not be handsome. All of Robert Redford’s features are average — his nose is not too big or too small — and thus he is handsome.

Sir Kenneth rejects this interpretation because, he writes, “Beauty is precious and rare, and if it were like a mechanical toy, made up of parts of average size that could be put together at will, we should not value it as we do.”

Nonetheless, Sir Kenneth states, proper proportion does play a role in beauty. The Greeks, who invented the nude, had some peculiarities of mind that led them to furnish the Western world with a pattern of perfection of the human form. For one thing, the Greeks had a “passion for mathematics.” One of the most famous images of Renaissance art is the Italian Leonardo da Vinci’s drawing of the man “squaring the circle.” In doing so, Leonardo was influenced by Vitruvius, a Roman architect and writer who was active between 46 and 30 B.C.E. (Of course, the Romans were influenced by the Greeks.) In a treatise on architecture, Vitruvius “announced that these buildings should have the proportions of a man.” In addition, Vitruvius stated that “a man’s body is a model of proportion because with arms or legs extended it fits into those ‘perfect’ geometrical forms, the square and the circle.” Unfortunately, Sir Kenneth writes, we do not know how “the Greek faith in harmonious numbers found expression in their painting and sculpture.”

So far, Sir Kenneth has shown that “the discovery of the nude as a form of art is connected with idealism and faith in measurable proportions,” but he goes on to write about “other peculiarities of the Greek mind” which furnished the Western world with a pattern of perfection of the human form.

For one thing, Sir Kenneth writes that the Greeks believed that “the body was something to be proud of, and should be kept in perfect form.” Obviously, therefore, “[t]he Greeks attached great importance to their nakedness.” We see this in the nakedness of the athletes at the Olympic games in ancient Greece.

Another idea of the Greeks, Sir Kenneth writes, is that “the spirit and body are one.” Because of this, the Greeks expressed many abstract ideas in terms of the human form. After all, the Greek gods have human form, unlike the Egyptian gods, which were half-animal.

According to Sir Kenneth,

[…] the nude gains its enduring value from the fact that it reconciles several contrary states. It takes the most sensual and immediately interesting object, the human body, and puts it out of reach of time and desire; it takes the most purely rational concept of which mankind is capable, mathematical order, and makes it a delight to the senses; and it takes the vague fears of the unknown and sweetens them by showing that the gods are like men and may be worshipped for their life-giving beauty rather than their death-dealing powers.

The place of the nude today is not like what it was in the days of the ancient Greeks. We no longer have “an insatiable appetite for the nude.” However, neither “are we likely once more to cut ourselves off from the body, as in the ascetic experience of medieval Christianity.” Therefore, the place of the nude today is in the middle of two extremes.

As Sir Kenneth writes, “We are reconciled to the fact that [the body] is our lifelong companion, and since art is concerned with sensory images the scale and rhythm of the body is not easily ignored.”

Note: The quotations by Sir Kenneth that appear in this essay are from his book The Nude: A Study in Ideal Form.

This entry was posted in Philosophy and tagged Sir Kenneth Clark. Bookmark the permalink.